The Prom that wasn’t

This day has been on my radar for a long, long time. And now it was here: Joey’s senior prom. It’s today. And Joey’s not going. I don’t know why she changed her mind. I just know that she did. I mean, I can certainly speculate why.

The prom tuxedo coupons featuring the popular model-type teens on them, started showing up when Joey was in 8th grade and have come every year since. I hated those coupons. They seemed a cruel reminder of who my son was not nor would ever be. One year I was actually going to write to the retailer and say “If you saw my son, if you met my son, you would know he’s nothing like these perfect teens on your flyer. Save yourself some postage and save me some grief. Count us out!” Soon after came the mailers from the Marines, the modeling agencies, and the “exclusive” mega smart scholar student recognition clubs all claiming that they had an interest in Joey. I know many parents think this means something when you get this junk in the mail. It does. It means your child’s high school probably sold your name to some database that preys on gullible parents of middle school and high school students. This information comes to your mailbox based on a birth date and nothing more. I know this because Joey is obese, has autism, and has a learning disability in reading, writing and math. I’m pretty sure none of these folks are truly interested in him.

Years ago, Joey refused to go to his 8th grade formal. I got it. No questions asked, as it made sense to me. Middle school was the worst experience of his life. He was happy to close that door as he had no desire to attend a dressy social outing where he might be ridiculed by some of the bullies that had made him miserable for 3 years of his life.

I did hold out hope for high school. When the Junior prom came up last year, he again refused to go. He said “Besides I don’t have a girlfriend.” I tried to explain that a prom “date” does not have to be a girlfriend. It can be a girl that is a friend. This idea seemed lost on him. Must be the literal autism brain, but to him a date is a date, and a date is of a romantic nature only.

Then there were the area special needs proms that came up. Joey had no interest in these either. When your child is diagnosed with high functioning autism, there is a huge sense of relief. But there are also burdens. Kids like Joey feel like they don’t belong with the “lower functioning” folks, or the folks with visibly obvious disabilities. Yet they don’t feel like they fit in with their typical or “normal” peers either. Joey has been to events with other kids on the spectrum and sometimes will ask “Uhhhh, is there something wrong with that guy?” I’ve explained to him some folks on the spectrum have a lot of autism, and some have a little. I’ve told him he has a little, and that his best friend, Drew, has even less than him. I once asked if he would date someone with a disability and he said that he is “open to dating someone with a disability but, not to be mean, only certain disabilities, not all of them”. Fair enough.

Weeks after the Junior prom last year, Joey told me that a girl had asked him to the prom months before, but that he didn’t know that she was serious. I was like “WHAT?!!!! And you’re just telling me this now?!?!” I dug deeper. Is she a friend? Was she serious? Was he sure? She was a friend. She was serious. He was sure. I then explained to him that he should have told her “yes”, and that he may have hurt her feelings and so on. He said it was okay because they had agreed to go together senior year.

So throughout all of the 2015-2016 year, Joey said the plan was still on. The prom coupons came and this time I saved them and I didn’t curse out the handsome boys in tuxedos featured on them. I checked in weekly to see if anything had changed with the plans. Nope. It was still a go. Soon the email reminders about prom dues started coming. I was reminding Joey that he would have to find out what color dress she was wearing. What are the plans? Pictures? Dinner? Transportation? He seemed bored and bothered with all of the details. I tried explaining that this is not something you just show up at. It is a coordinated effort. I told him he needed to get her phone number and he disagreed. His sister had suggested that Joey “promposal” the girl but Joey said “No way!” He said he told his date his sister’s suggestion and that she asked what a promposal was. He told her it is when the guy makes a poster and some sort of special surprise to ask a girl to prom. She said it sounded stupid and Joey agreed.

But I remained the doubting Thomas. I had to know for certain that this was legit. My daughter attends the same high school and knew who the girl was. She said the girl was super sweet, very nice and quiet. I asked if she would mind checking with the girl to see if she REALLY was going to the prom with Joey. She asked and the girl confirmed that she was! It was REAL!

It was real…until about 3 weeks before the prom, when it was no longer real. Joey didn’t even tell me. One of my daughter’s friends asked Joey if he was going to the prom and she  overheard him say “Not anymore. She changed her mind.” And then my daughter told me. I hoped that it wasn’t true, yet I knew that it likely was.

I wasn’t sure how to approach Joey because I was not sure if he was hurt by this. When I inquired about what happened, he said her friend approached him and told him that “she changed her mind and decided she doesn’t want to go to the prom this year after all.” I wondered if this was true. Did she find another date? Was it due to prom costs? Did her friends talk her out of it? Was she ridiculed? Was she worried about what others thought? Was she worried that Joey thought it was a romantic date? What changed? What happened? I tried to get a feel from Joey if he was upset, and he really didn’t seem to be. He didn’t seem overly eager to talk about it, but he’s not overly eager to talk about anything outside of his interest categories.

Turns out that Joe’s best friend Drew’s was not going either. The girl he asked told him “I’ll think about it”. I’m not sure that she ever started or finished thinking about it.

So instead of going to the prom, Drew has invited Joey to the movies to see Ratchet and Clank. Joey is pumped! He loves Drew. He loves animated movies. He loves to share a story where Drew told him how he got kicked out of the movie theater when the Titanic was re-released in theaters. When folks were jumping into the frigid water, Drew was standing and yelling out diving scores: 10! 5! and so on, LOL. Joey can’t wait for tonight.

I really thought this day would make me sad. Thought I would throw myself some type of internal pity party. Perhaps an emotional tantrum of sorts. Thought I might not be able to type this post without some tears. But it is okay and I am okay. I may never see my son in a tuxedo and that is okay. Tuxedos and proms are expensive. But two teenage buddies with autism, spending a Friday night hanging at the movie theater with buttered popcorn, watching an animated film, not caring a bit about the prom… Well, that really is priceless.

End note: Yes, just for kicks, I did place a photo of his face on the mailer and dang – he looks good!

Here’s the senior yearbook ad that we purchased for Joey:

“Joseph Combs IV – You will not be found on the “popular” pages. You were never the star athlete nor did you ever receive any academic awards. You were not voted “best” this or “most” that. Yet you made us and anyone that knew you and your story incredibly proud. Despite having autism and the obstacles that come with it, you found your way. You made friends and you made a positive impression on every teacher that ever taught you. Even when the grades were low, the praise was always high. Respectful. Kind. Well Behaved. Funny. Delightful. Caring. These are all words repeatedly used by teachers to describe you. You are a blessing! We love you and thank God for the mighty young man that you are. Well done son!
Much love-Mom & Dad “ 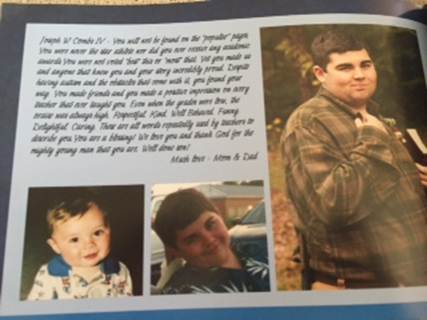